The development steps for Shiny Stats, my Unity Asset product, are nearly over.
After roughly 2 years of work, quite not regular though, there are still plenty of things to do such as documentation and… marketing !

Marketing today will be about making a game demonstrator to show off Shiny Stats awesomeness. Let’s go. 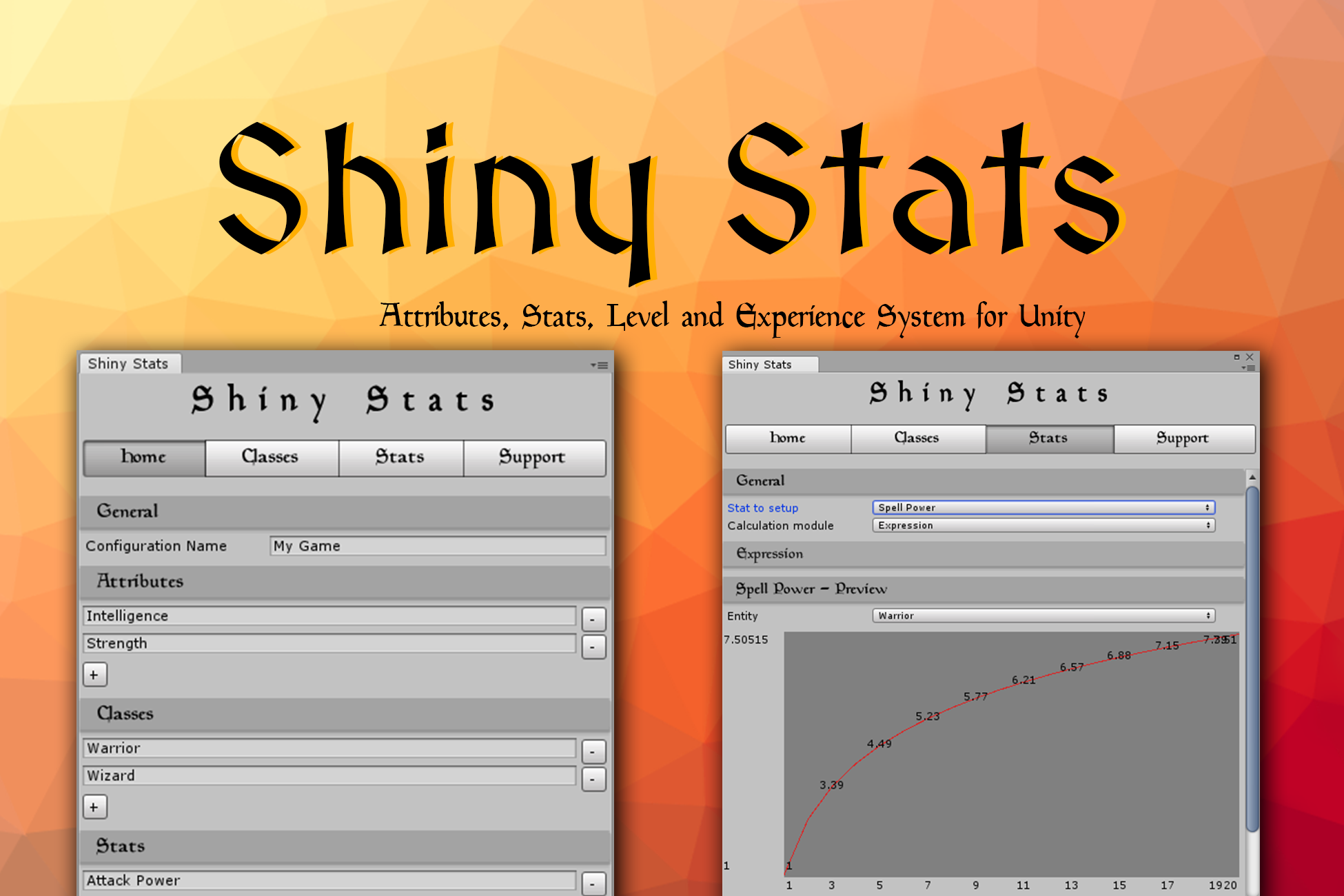 Having a playable demo to convince developers to adopt (to buy!) Shiny Stats will definitively help. The older-version-of-me didn’t see this coming back in 2017 when I did the initial planning. I told myself that screenshots with a lot of data charts would do the job as communication material. This was very pragmatic, but I realize today that this will not advertise Shiny Stats the right way. Shiny Stats is not about mathematics, it’s about improving game developers productivity so they can focus on what matters.

Shiny Stats aims to give game makers a ready-to-use utility to add stats and leveling mechanisms into their games. It is a wide subject, a complex one, and a lot of game uses these mechanisms. This is the kind of asset I would have bought while making Caatacombb in 2015 because this was very long to implement from scratch.

My demo should showcase a mini RPG example because this genre covers all the Shiny Stats possibilities thus this is my key audience I want to focus on. And I’ll have to be careful with the communication to make it clear that the Unity Asset also fits for non-RPG games, such as Tower Defense games for instance.

This game demo will be shipped with the Shiny Stats Unity Asset and I don’t want to bother game developers with a heavy demo. So I won’t reuse any official Unity demo code and assets. Unity’s demos are also a bit over complex for my need. That is exactly why I can’t also reuse my Caatacombb game assets either! So we’ll kinda make the game from scratch.

Ok, we are about to make a game here. Almost there. First, let’s pick a name for this demo-game: Shiny Tiny RPG.
That’s cute, it reminds Shiny Stats, and has the RPG tag in it, this will be our tiny RPG game featuring Shiny Stats.

Minimalist as fuck. A bit like Realm of the Mad God but with 3D tech.

We will follow that quote for the whole game conception. 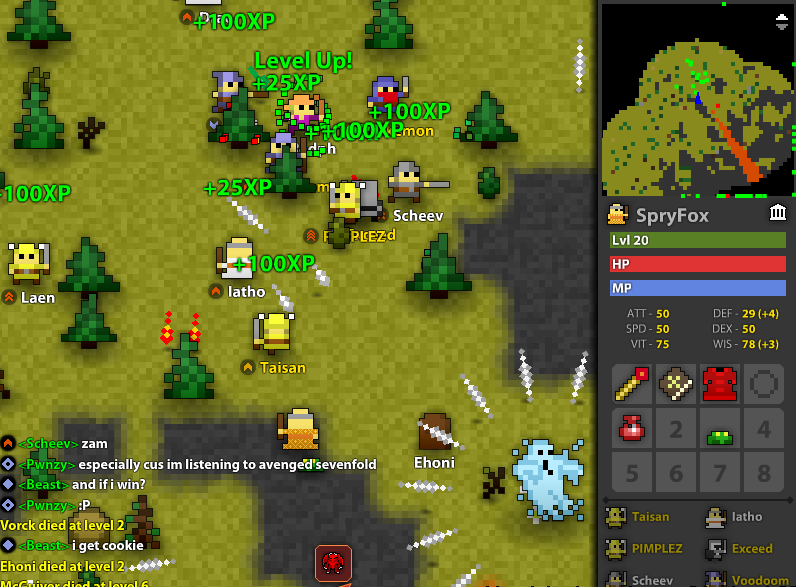 Realm of the Mad God

Wooh, we start the game conception with the Shiny Stats config.
I am cherry picking a bit into World Of Warcraft’s vocabulary since it was one of the most played MMORPG game ever.

We will set up a small map where live some enemies to defeat and one ultimate boss. The game idea is that the player has to climb levels by killing enemies to improve its power in order to be strong enough to defeat the boss.
The enemies will be scattered on the map, from level 1 to 19. The boss will be level 20.

The player starts the game by choosing his class. He can change his class whenever he wants, without loosing his progression - Not typical, but this is convenient for the demo purpose.

Character movements will be with the keyboard arrows (WASD).

There are two type of attack: 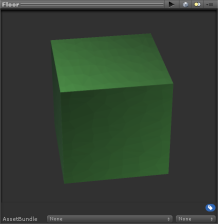 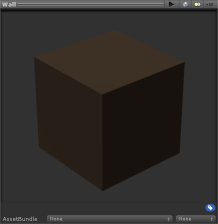 To create the map, we only use Cube meshes. We use a 1x1x1 cube as a reference to scale the map properly. In our need, the map will be quite big to put a lot of empty space between the enemies, with walls to limit the zone and guide the player. It will look like a closed dungeon, in a cheap way. 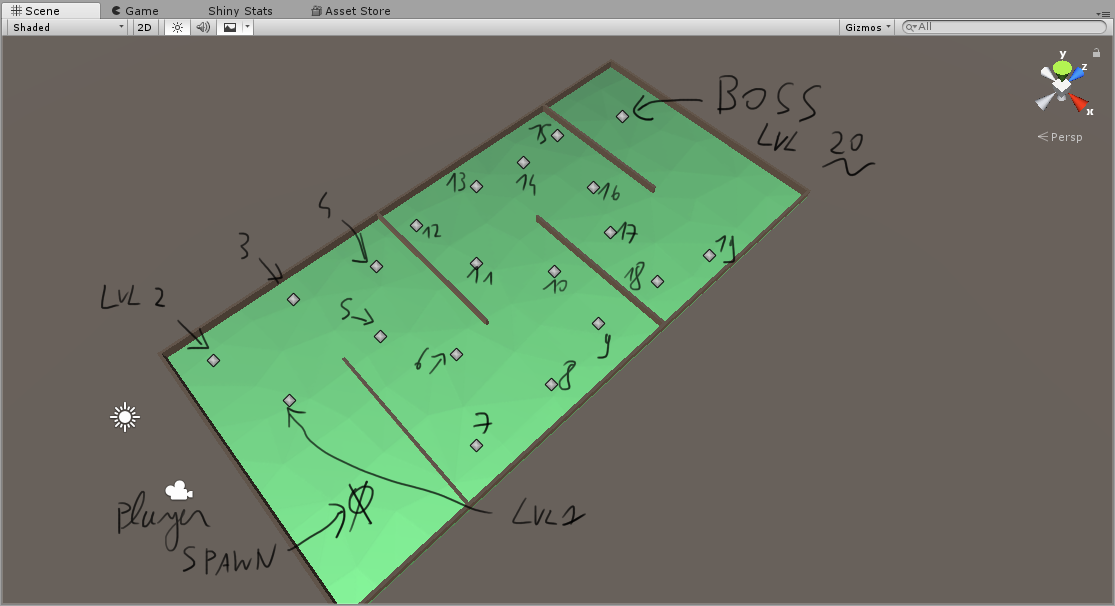 Similar to the map, we will only use primary meshes mixed together instead of doing ‘real’ 3D models.

We create 6 characters: 5 playable classes (player and enemies) and one boss. 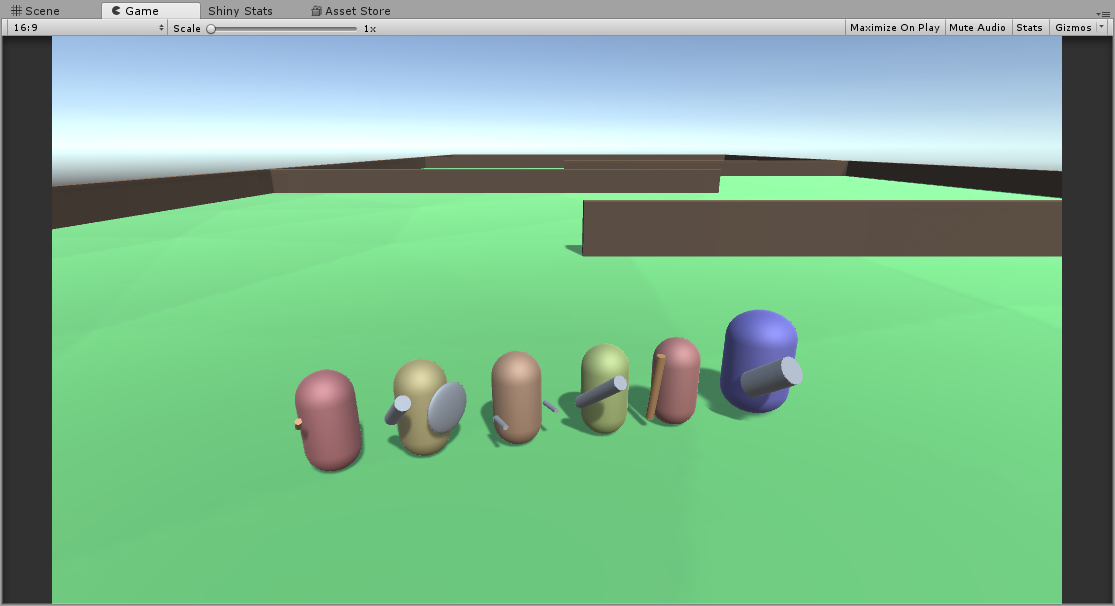 We create a set of 2 attack animations for each class using the standard Unity animation system with an animator controller, which allows us to record keyframes on the go and use a state machine animator for the logic.
Dead easy, but far from producing awesome motions.

We will quickly setup the stats mechanisms thanks to Shiny Stats.

I create a new empty GameObject, and attach the ShinyStats script on it. Let’s configure it with setting we have specified so far. 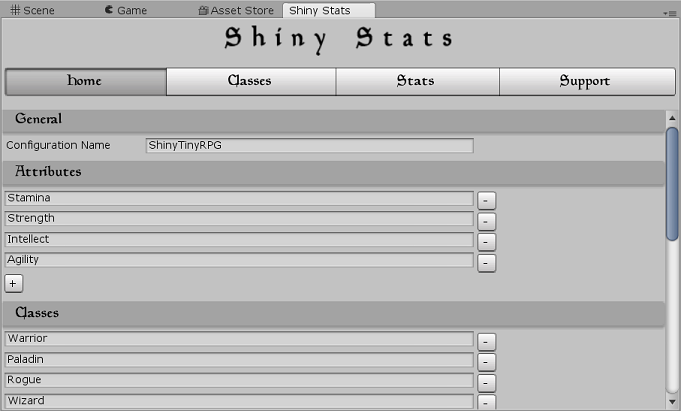 Then, I attach the ShinyStatsEntity script to the 6 characters and setup their respective classes. 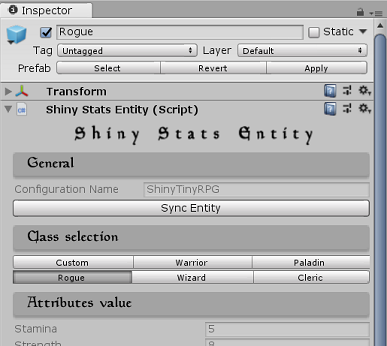 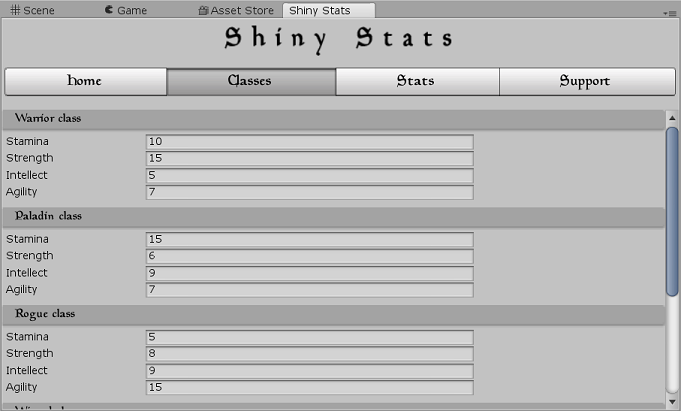 The Experience and Experience Drop stats will be the easiest stats to configure. We will use arbitrary values for each level so it requires a single kill to level up from 1 to 2 and increase the difficulty gradually so there is ~10 enemies to grind at level 19 to reach 20. 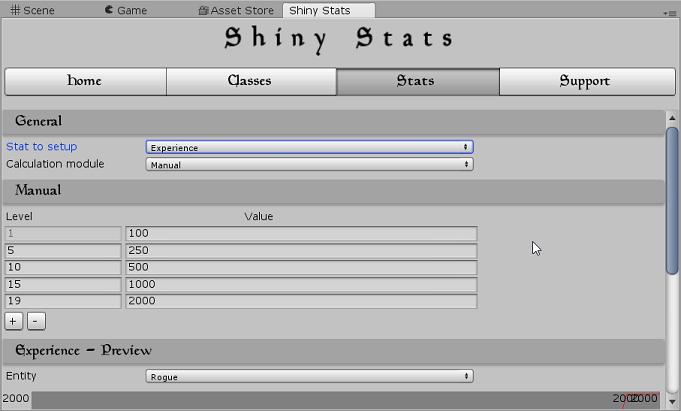 Walking speed will marginally increase with the level, but is extremely influenced by the initial Agility attribute of the character. The Rogue will walk way faster than other classes.
The funny mechanism that I certainly want to introduce is that the player won’t be able to outrun a rogue enemy (unless the player picked Rogue too). 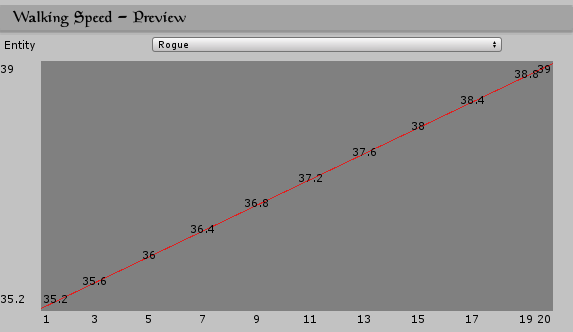 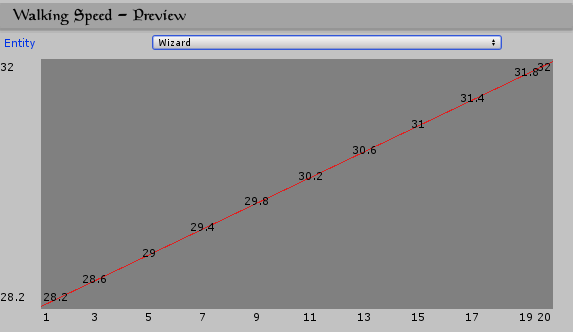 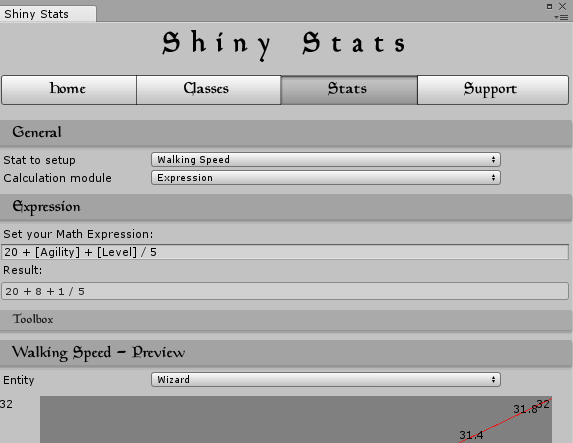 The remaining stats will use logarithms-like functions so the level affects them less and less. The mechanics I want to introduce is that the Health points will increase more than the Attack Power, Spell Power and Attack Speed in the top levels, to extend the combats duration in the end game. 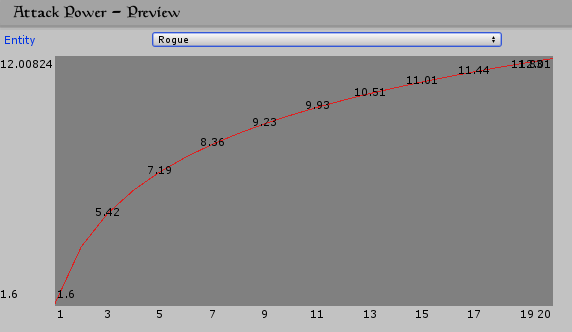 The Attack Speed is way more connected into the game and might mess around the animations and the experience overall. To be fair, I didn’t plan very well for attack speed variation in the gameplay. So we will leave this as a constant in Shiny Stats.

This will be the minimum, constant, period of time in seconds between two consecutive attacks regardless the class and level.

With a reduced amount of UI panels, we can keep the game really tiny and still showing off a lot of stats… from Shiny Stats. 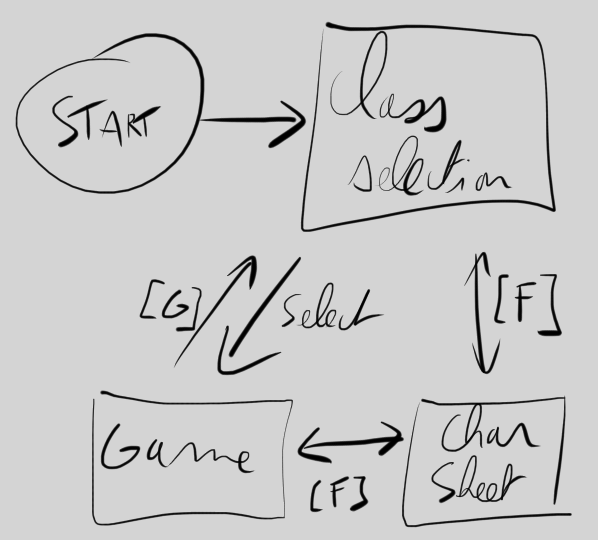 We will use the CharacterController component from Unity to handle the player’s movements. The initial code, without the extra game management logic and Shiny Stats, looks like the code below.

The health system will cover the characters life and death.
We reload the scene to restart the game when the player dies. When this script is attached to an enemy, it will give experience points to the player on death.

We can also add a passive health regen that we always have in RPG games.

A last script good to share is the character sheet panel code.

We adopted a stateless design that solves the ShinyStatsEntity reference on its own when possible. Indeed, the player can change its character at any moment, breaking references due to GameOject.Destroy() and GameObject.Instanciate() actions I am using. There are many ways to get over this, but this design is modular and maintainable.

An performance improvement is possible: register to the OnLevelChanged event to catch updates instead of looping in the FixedUpdate loop. 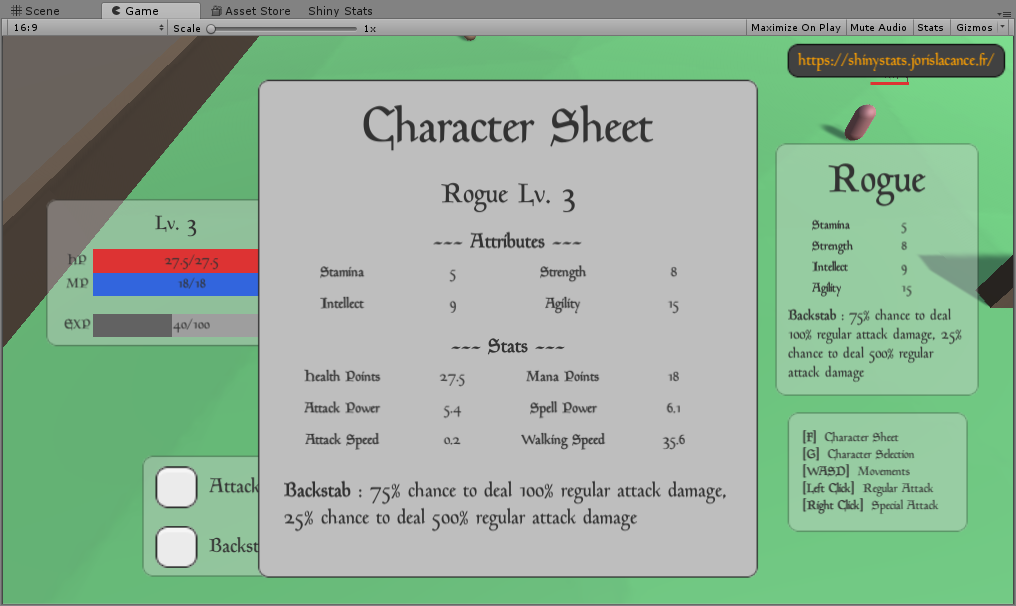 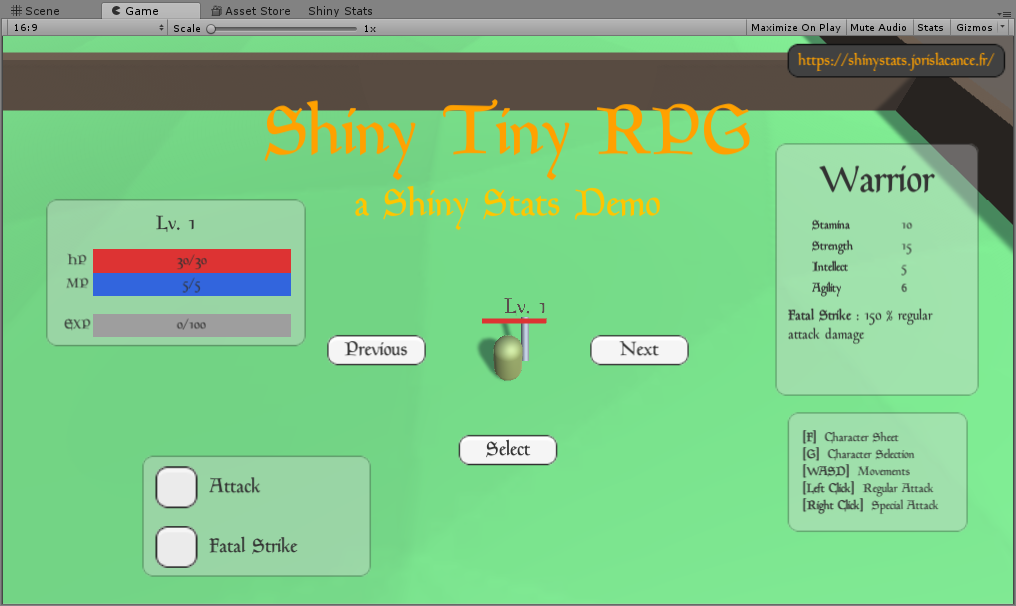 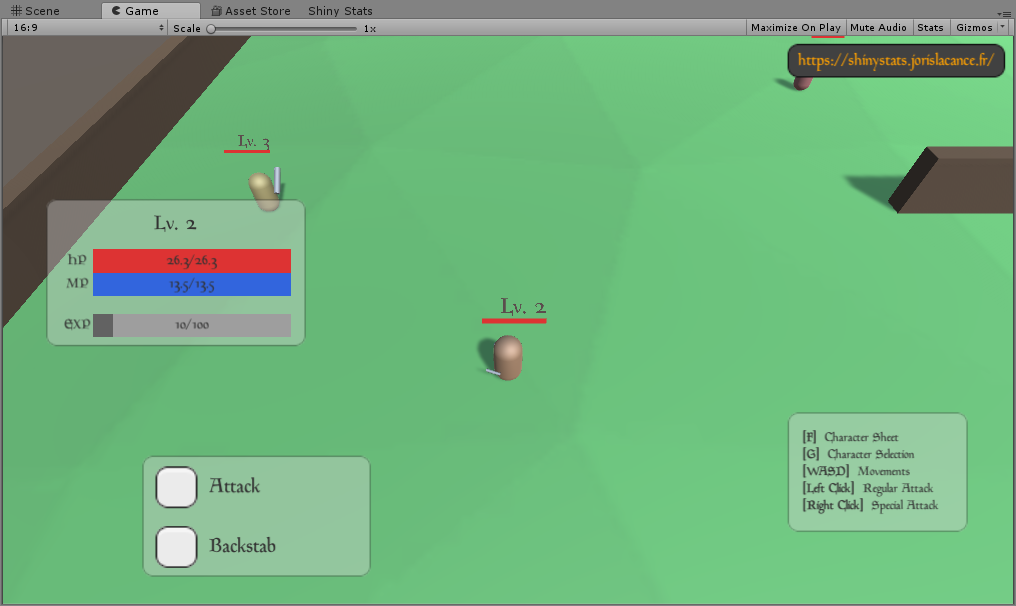